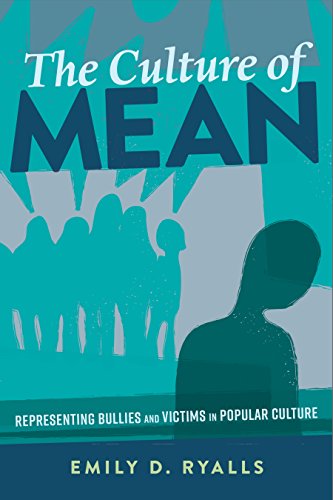 The Culture of Mean is the first book-length feminist critical exploration of representations of youth bullying in media. Bringing into conversation scholarship on feminism, media, new communication technologies, surveillance, gender, race, sexuality, and class, Emily D. Ryalls critically examines the explosion of discourse about youth bullying that has occurred in the United States during the last two decades. Countering the monolithic and extreme cultural reaction to narratives about bullying, Ryalls argues that, while it seems common sense to view bullying as always wrong and dangerous, not all aggression is bullying and it is problematic to assume so, because it becomes very difficult to differentiate between healthy conflict and unhealthy (potentially violent) torment. Moreover, since the label "bullying" often does not differentiate between teasing, conflict, sexual harassment, and violence, increasingly the most common way to deal with young people accused of bullying is to criminalize their actions. Through an analysis of books, film, television, and journalistic accounts of bullying, The Culture of Mean shows how constructions of bullying in popular culture create an overly simplistic binary of good and bad people. This process individualizes the problem of bullying and disallows a more complex understanding of the structural issues at work by suggesting that putting an end to bullying simply requires incarcerating those evil teens who are prone to bullying behaviors. This critical perspective of bullying will be of interest to scholars and students interested in the fields of girls’ studies, cultural studies, communication, education, sociology, and media studies, as well as parents of school-aged children.